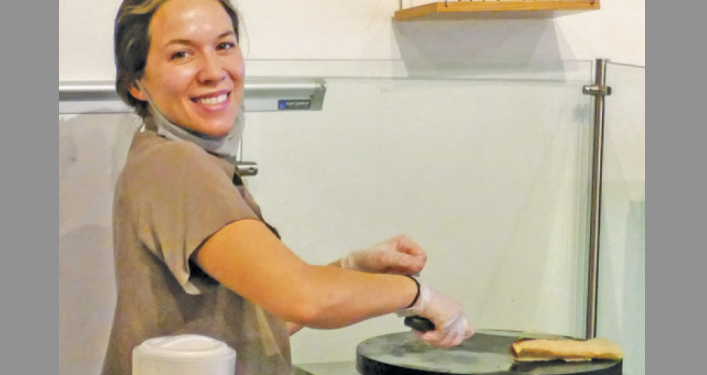 The Chefs column highlights our local culinary masters. They share a recipe that has a lot of meaning to them and thankfully, how to make it. (Well at least most of it, sometimes secrets must remain that.) This month’s chef is Lisa Roiret.

Lisa started making crepes four years ago at the Peachtree City Farmers Market with her grandmother’s authentic batter recipes.  She quickly grew a huge following with her French recipes and started catering for weddings and celebrity events in Atlanta. She bought a food truck, and before she knew it she had a store smack down in the middle of Main Street in downtown Senoia!

Her passion for French cooking and particularly crêpes originated when she was just a child.  Lisa was born in Nice, France, then raised on the island of Corsica, where she first learned how to make crêpes.  Her authentic recipe has been in her family for generations.

In 1997, Lisa relocated to the U.S. where she finished school and went on to join the US Navy as a Helicopter Mechanic, based in San Diego. Every chance she had, Lisa would try crepes  to get a little taste of her childhood, but they never tasted like real French crêpes.

While stationed in San Diego, Lisa would make French crêpes on occasional Friday mornings.  It was a huge hit, and all of the officers and enlisted lined up at the door, anxious to get a taste! The delicious smell coming from down the street was simply irresistible! Once out of the Navy, Lisa relocated to Senoia, and Lisa’s Crêperie was born.

Open at 7 a.m.  daily, her cafe serves delicious specialty coffee from local roasters, and authentic French pastries such as croissant dough cinnamon rolls, rotating seasonal specials and more!  Lisa’s food truck also operates all over Atlanta and comes to local neighborhoods daily.  Book her truck for your next event.