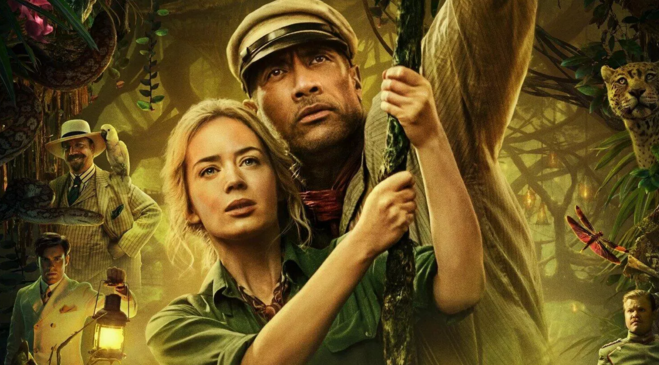 Jungle Cruise (In Theaters and on Disney+ with Premier Access) No Fix 5/10 – It’s unlikely that “Jungle Cruise” will become the next “Pirates of the Caribbean” franchise.  The film based on the Disneyland ride is as lame as the jokes that protagonist/hero Frank Wolff (Dwayne Johnson) tells his passengers while taking them on a little tour of the Amazon.

“Jungle Cruise” is set around 100 years ago.  Wolff is the skipper of a rough and rugged riverboat.  After running afoul of a local businessman named Nilo (Paul Giamatti), he’s hired by explorer Lily Houghton (Emily Blunt) to find a mystic tree, the leaves of which have supernatural healing powers.  But Houghton isn’t the only one interested in finding the tree.  An evil German Prince (Jesse Plemons) will stop at nothing to acquire those enchanted leaves.  The race down the river is on, and it’s up to Wolff to guide Houghton and her oh so proper brother MacGregor (Jack Whitehall) safely to their magical destination.

So much of “Jungle Cruise” seems incomplete.  While we get rushed flashbacks to fill in some details, the entire project is hopelessly contrived and targeted almost exclusively at younger viewers.  Although there is a high body count, the goofy and bloodless nature of the action and peril makes the film the softest PG-13 film I’ve seen in years.

Johnson is likable in the lead, but his American accent is hard to explain as you learn more about his history.  Despite their acting prowess, Plemons and Giamatti seem out of place and awkward. Plemons gets the thankless role of a weird German prince whose identity and motivations are so unclear that he comes off far too cartoonish.  Blunt is fine, but she has little chemistry with Johnson.

There’s no need to see this one in the theater.

Masters of the Universe: Revelation (streaming now) – Kevin Smith reimagined the popular 1980s animated television series for a new generation while paying homage to the mythology (based on Mattel toys) for hardcore fans.  The result is surprisingly effective.  While the campy, juvenile elements shine through, Smith’s shift of the focus to characters other than He-Man is refreshing.  And his all-star voice talent is impressive, including Mark Hamill as Skeletor and Sarah Michelle Gellar as Teela, along with a host of others.

Beckett (August 13) – Watching the trailer for this one gave me “Jason Bourne” vibes.  “Tenet’s” John David Washington plays Beckett, an American vacationing in Greece with his girlfriend (Oscar-winner Alicia Vikander).  When they have a terrible car accident, Beckett awakens alone in a hospital room.  After the police can’t explain what happened to his girlfriend, he goes on the run, discovering a dangerous, shadowy conspiracy (are there any other kind?).  This on-the-run thriller looks exciting, and Washington is always worth watching.

The Chair (season 1, August 20) – Sandra Oh (see “Killing Eve”) plays Ji-Yoon, a college professor elevated to the chair of her department when the former leader Bill (Jay Duplass) becomes embroiled in a scandal.  Now it’s up to Ji-Yoon to restore the University’s reputation while reconciling her feelings for the popular but disgraced Bill.  The cast is terrific with Holland Taylor, David Morse, and Bob Balaban.

What If…?: (August 11) – The Marvel Cinematic Universe continues to morph this time with an animated adaptation of the comic book limited series “What If…?”  The concept presents an alternate universe of sorts where characters are turned on their heads.  Therefore, anything can happen with diametrically opposed heroes teaming up, sometimes with villains.  Each episode promises an askew view of the MCU.

Reminiscence: (August 20) – Writer/director Lisa Joy, a producer of HBO’s “Westworld,” makes her feature directing debut with this science fiction technological thriller starring Hugh Jackman.  The story has a scientist named Nick Bannister (Jackman) devising a method to relive his past in hopes of finding a lost love.  Rebecca Ferguson and Thandiwe Newton also star.  This one reminds me of “Inception.”

Nine Perfect Strangers (August 18) – This 8-episode adaptation of the Liane Moriarty bestseller looks very interesting.  Nine strangers are called to a wellness retreat run by the mysterious Masha (Nicole Kidman).  Once there, they begin to open up to their fellow guests.  But why are they in this place?  And what are Masha’s plans for them?  The cast includes Melissa McCarthy, Regina Hall, Bobby Cannavale, and Michael Shannon.

Mr. Corman (season 1, August 6) – I caught the first episode of this show last month, and it’s pretty dark and moody.  Joseph Gordon-Levitt plays Josh Corman, a schoolteacher in the San Fernando Valley who is beset with anxiety and regret even at his relatively young age.  It’s a whimsical series with a tough edge. But how can you resist any show with the great Debra Winger playing Gordon-Levitt’s mom?

CODA (August 13) – This film was a big Sundance hit, with Apple winning the bidding war. CODA stands for Child of Deaf Adults.  The story is about Ruby (Emilia Jones), who is the only hearing member of her fisherman family.  An integral part of the family business, Emily longs to do something else; she’s a prospective singer. The trailers are heartbreaking.  And it’s good to see Oscar-winner Marlee Matlin as Emily’s mother.

Val: (August 6) Fix 7/10 – This documentary gives us a peek into the life of A-list actor Val Kilmer as he continues to battle the lingering effects of throat cancer.  The movie is a retrospective of the actor’s career as told through his remarkable home movie collection.  It’s a heartfelt and intimate exploration of a creative soul.

Stillwater (In theaters) Fix Rating 6/10 – Matt Damon plays Bill, a frustrated single father who travels from Oklahoma to France in hopes of gaining the release of his imprisoned daughter Allison (played by Abigail Breslin).  When the film begins, Allison has already been convicted of murder. Bill hopes to find the real killer and bring his little girl home.  Of course, navigating the terrain of a foreign country isn’t easy, especially when you’re not welcomed.

Directed by Tom McCarthy (see “The Station Agent” and “Spotlight”), “Stillwater” works best when it focuses on the dramatic, interpersonal story avoiding the cliched thriller crime mystery elements. Damon and Breslin are worth watching in this uneven movie about a father attempting to find redemption.

The Suicide Squad (August 6) – This is a sequel to the 2016 hit superhero yarn that takes a wrecking ball to the first one.  Readers may remember that “Suicide Squad” may have made money, but the movie was hardly a critical darling.  DC Entertainment and Warner Bros. smartly hired “Guardians of the Galaxy” director James Gunn to helm “The Suicide Squad” (you see, this sequel’s title has cleverly added the “The”), and the buzz has been strong for the new vision.

The cast is fantastic. Margot Robbie returns as Harley Quinn, Idris Elba joins her as Bloodsport, John Cena plays Peacemaker, and Pete Davidson is Blackguard.  Expect epic comic bedlam as a ragtag group of anti-heroes takes on an army of evil-doers.

Free Guy (August ) – In this colorful sci-fi, Ryan Reynolds plays Guy, an NPC (or nonplayer character) in a video game world. When he’s visited by Millie (“Killing Eve’s” Jodie Comer), he becomes self-aware.  This awakening naturally leads him on a grand adventure where he takes on villainous game creator Antoine (played by Oscar-winning director Taika Waititi).

The View from the Pines: Treating the ...