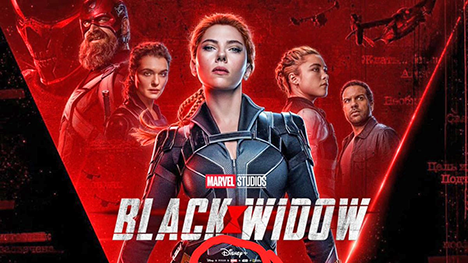 Old (In Theaters July 23) – After finding his way back following the monumental failures of “The Happening,” “The Last Airbender,” and “After Earth,” writer/director M. Night Shyamalan seems to return to a familiar fairy tale-type narrative.

In “Old,” Shyamalan adapts the graphic novel “Sandcastle” by Pierre-Oscar Lévy and Frederick Peeters.  The intriguing premise has a family discovering and becoming trapped on a beautiful hidden beach. As they attempt to leave, they realize that they are growing older, and one day on the beach will be their entire lives.

Let’s hope that this one is more in line with “Signs” than “The Happening.”

Black Widow: (July 9) – While the last two episodes of “Loki” roll out in July, the MCU rolls back into theaters (along with streaming) with a prequel showcasing the origins of Natasha Romanoff, aka Black Widow.  The story takes place between the events of “Captain America: Civil War” and “Avengers: Infinity War.” Cate Shortland directs the film (see Showtime’s “Smilf”).  Romanoff’s relatives are played by “Stranger Things” alum David Harbour, Oscar-nominee Florence Pugh, and Oscar-winner Rachel Weisz.

Space Jam: A New Legacy: (July 16) – Twenty-five years after Michael Jordan hit the court with Looney Toons characters, LeBron James steps into his big shoes.  In this fictional world, James plays a thinly-veiled version of himself.  When his son Dom (Cedric Joe) is captured, James challenges the Goon Squad in hopes of winning the little boy’s safety.  The trailers tease comedic hilarity and out-of-this-world basketball play.

Bill & Ted Face the Music: (Now Streaming) Fix Rating 8/10 – One of the pleasant surprises during the pandemic was streaming “Bill & Ted Face the Music.” This long-awaited sequel to the beloved late 1980s, early 1990s franchise hit the mark perfectly.  Not only does the film reunite Keanu Reeves and Alex Winter as the title musically inclined duo, but it gives us their uber-cool daughters, Thea and Billie, played by Samara Weaving and Bidgette Lundy-Paine.  This final installment in the goofy trilogy is arguably better than the second film and a fitting way to bring it to a close.  Except with the significant addition of the daughters, can we expect another outing starring Thea and Billie?

Ted Lasso (Season 2 starts on July 23) – Everyone’s favorite American football coach turned London soccer team manager returns for more heart-warming comic goodness.  If you’ve not seen this show, try to catch it immediately.  The series stars Jason Sudeikis as the title character, a mustachioed eternal optimist whose infectious good nature comes in handy. Lasso and his right-hand man, Coach Beard (played by show co-creator Brendan Hunt), must retool their game skills for a different sort of competition both on and off the field.  Whether or not the team is victorious, “Ted Lasso” is Apple’s winner.

The Tomorrow War: (Now Streaming) – The MCU’s Chris Pratt stars as a heroic father named Dan Forester.  It will be up to Dan to travel to the future to help win a war that threatens all of humanity. “The Tomorrow War” is directed by Chris McKay, who gave us “The Lego Batman Movie.” J.K. Simmons and rising star Sam Richardson (see him in the great “Werewolves Within”) are also in the cast.

Zola: (In theaters) Fix Rating 8/10 – This might be the first movie based on a viral Twitter thread. Directed with pizzazz and arthouse sensibilities by Janicza Bravo, the story follows Zola (Taylour Paige) as she becomes an unwilling participant in a scary road trip.  While waitressing, Zola encounters a foul-mouthed, nearly unintelligible stripper named Stefani (an inspiring Riley Keough), who invites her to make some money at a club in Florida.  But Zola gets way more than she bargained for, as Stefani’s scary handler X (Colman Domingo, who’s terrific) has other plans.

Funny and frightening, “Zola” is one of the most entertaining films available in theaters.  But a word of caution, it’s a mature picture featuring some frank depictions of sexuality and adult situations.

Snake Eyes (July 23) – After suffering through the bloated blockbuster “F9,” I left the theater with the idea that it felt like a “G.I. Joe” movie.  And as luck would have it, we’re getting another in that franchise inspired by the Hasbro toys.

“Snake Eyes” is the first theatrical sequel since 2013’s “G.I. Joe: Retaliation.”  That one was directed by Jon M. Chu (see “In the Heights”) and featured an impressive cast, including Dwayne Johnson.  But “Snake Eyes” is an “Origins” movie that gives us the backstory of the conflicted and deadly assassin in the title.

It’s directed by Robert Schwentke, who has directed decent action pictures like “Red” and hard-to-watch films like “R.I.P.D.” What’s promising is actor Henry Golding, who, after being mentioned as the possible next James Bond, gets to star in his own big-budgeted actioner.

The Music: Local and Live in July