The Shopper Kitchen: Cooking up some Christmas memories 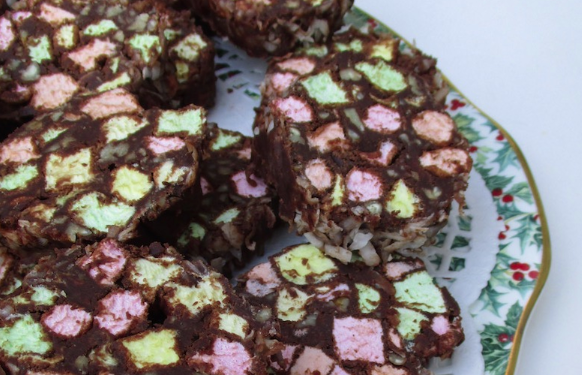 Like lots of home cooks, I’m cooking and baking more than usual at the holidays, and while I love to check out cooking magazines for new ideas, I often find myself reaching for “old faithful” recipes. One is a candy I haven’t made in a few years, and it was time to revisit this easy and delicious recipe for Cathedral Window Candy.

There are several variations of this recipe on the internet, but I like to make it according to the directions I received from the late Joan Chandler. When I was a student at West Georgia College, I was hired as a student assistant in the Music Department. The department secretary, Joan Chandler, was my boss and quickly became my friend. (Her name was spelled J-O-A-N but was pronounced “Joanne,” and Mrs. Chandler told me that was because she had a twin sister named June, and her mother wanted both her girls’ names to have four letters.)

The Music Department kept both Mrs. Chandler and me plenty busy because there was always something to do. If I wasn’t typing up programs for music recitals or letters for the department chair, I was running errands or delivering messages to the professors. But in between all the work, Mrs. Chandler and I became friends, and one Christmas, she shared this delicious treat and recipe with me.

I have one caution for you, though: do not assume multicolored mini marshmallows will always be available when you need them. They will not. White ones, yes. Multicolored, no, so if you want to make these treats, be sure you’ve got time to visit a grocery store or two in case your first-choice grocery store is out of the colorful marshmallows.

Mrs. Chandler is spending her Christmases in Heaven now, but she’s got a permanent place in my heart—and my recipe files—thanks to these heavenly treats.

In a large saucepan, melt butter and chocolate chips over low heat, stirring constantly to prevent scorching. When butter has melted and is thoroughly combined with the chocolate chips, remove pan from heat and stir in vanilla and pecans. Let mixture cool for about 15 minutes but not long enough to thicken.

Fold in the marshmallows and stir until well coated. Using an 18-inch piece of waxed paper, spoon half of the mixture lengthwise down the center of the paper. Shape mixture into a log that is approximately 12 x 2 inches. Sprinkle with 1/2 cup of the coconut, evenly coating the outside of the chocolate log.

Wrap the log tightly in the waxed paper, folding the ends snugly and tucking under the log. Repeat with the other half of the marshmallow mixture and the remaining coconut. Chill logs until firm, about 2-3 hours or overnight. Unwrap logs and cut into 1/2-inch slices. Yields about 30 large candies.