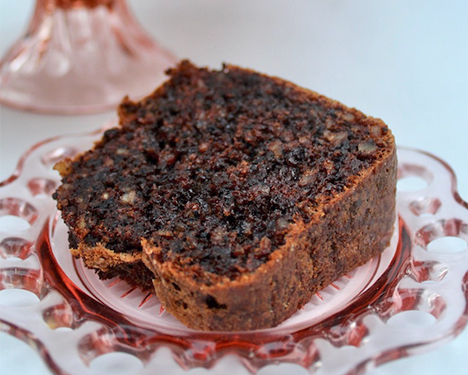 If you’re going to make a fussy or fancy dessert, this is certainly the time of year to do it. Only at the holidays do I make treats with lavish ingredients and time-consuming cooking methods. This cake, my friends, qualifies on both counts.

I’ve been researching old department store recipes for a decade now, and somewhere in that decade, I happened across the Just Desserts cookbook from the Food Hall at Strawbridge & Clothier in Philadelphia. The recipe that most caught my eye was this Sinful Chocolate Walnut Cake calling for sixteen eggs!

Normally, I would not be tempted to use a recipe calling for sixteen eggs. But normally, I would not have a spare five or six dozen sitting in my refrigerator. As I mentioned a few months ago, my dad decided to start raising chickens this year, and we’ve been enjoying loads of fresh eggs at my house ever since. Was this cake worth sixteen of them? I believe it was!

But here’s the thing: While this was not the most difficult cake I’ve ever made, it was probably one of the messiest to prepare, so make sure your sink and countertops are clear, because you’re going to need the space. And when I tell you that the batter is thick, I mean thick. As I made it, I started to doubt that this could possibly turn out well, and yet when I baked it, cut it and took a bite, it was one of the lightest, airiest cakes I’ve ever baked. All those egg whites, I guess? I did take extra care to fold them into the batter as gently as I could, so I recommend that tip to you as well.

Sometimes, I like to try what sounds like a crazy recipe just to see if the thing works. And despite this cake’s name, the result was just heavenly!

Using the large bowl of a stand mixer, beat egg yolks for 15 minutes, until they are light yellow, thick and creamy. Add confectioners’ sugar, baking powder, baking soda, chocolate and walnuts and combine well. Mixture will be extremely thick.

In another large bowl, beat the egg whites until they are very stiff and peaks form. Gently fold egg whites into the batter, incorporating about a third of the egg whites at a time.

Butter and flour an angel food cake or tube pan. Then line the pan with wax paper, and butter and flour this lining as well. Pour batter into prepared pan and bake for one hour at 325 degrees.

Let cake cool in pan for 20 minutes or so before removing from pan.