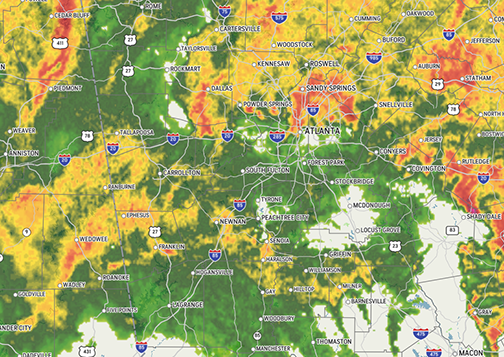 9 a.m. UPDATE … The National Weather Service has canceled the Tornado Watch for Coweta.

Most of metro Atlanta including Coweta County is under a Flash Flood Watch as well as a Tornado Watch as Tropical Depression Fred rambles through the area.

Rainfall associated with Fred will continue through much of the day where some areas have already received anywhere from 2 to 4 inches of rain thus resulting in the Flash Flood Watch. Fred should be out of the area later this evening but the Flash Flood Watch will remain in effect until 8 a.m. Wednesday.

A Tornado Watch is in effect until 1 p.m. today for Coweta and neighboring counties Meriwether, Fayette, Fulton and Spalding. There is a potential for brief spin-off tornadoes due to the rotation of Fred. Earlier this morning, a tornado touched down in north Meriwether County just east of Lone Oak. Multiple trees were downed but no injuries have been reported.

Here’s the 24-hourforecast from the National Weather Service in Peachtree City:

TUESDAY NIGHT – A 30 percent chance of showers and thunderstorms, mainly before 8pm. Mostly cloudy, with a low around 69. West wind 5 to 10 mph becoming light and variable in the evening.

WEDNESDAY – A 30 percent chance of showers and thunderstorms, mainly after 3pm. Partly sunny, with a high near 88. Calm wind becoming southwest around 5 mph.