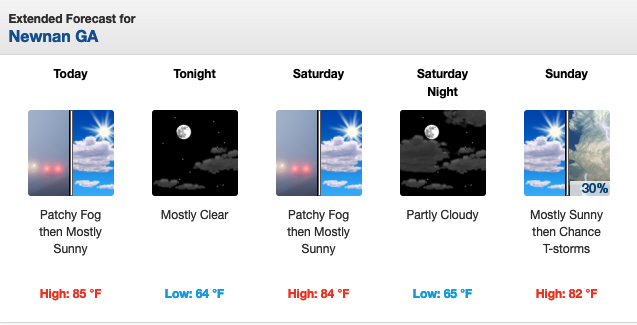 The run of dry weather will continue into the weekend here in Coweta County, says the National Weather Service in Peachtree City.

Coweta can expect mostly sunny skies today, Saturday and Sunday before the first rain chances appear in the extended forecast on Sunday afternoon.

High temperatures will be in the low-to-mid 80s with overnight lows near 65 degrees.

Sunday’s rain chances are listed at 30 percent after 3 pm and increase to 40 percent later in the evening. Monday’s forecast is calling for mostly cloudy skies with a 70 percent chance of showers.

FRIDAY – Patchy fog before 10am. Otherwise, mostly sunny, with a high near 85. Calm wind becoming east around 5 mph in the afternoon.

FRIDAY NIGHT – Mostly clear, with a low around 64. East wind around 5 mph.

SATURDAY – Patchy fog before 9am. Otherwise, mostly sunny, with a high near 84. Calm wind becoming southeast around 5 mph in the afternoon.

SUNDAY – A 30 percent chance of showers and thunderstorms after 3pm. Mostly sunny, with a high near 82. Calm wind becoming south around 5 mph in the afternoon.

SUNDAY NIGHT – A 40 percent chance of showers and thunderstorms. Mostly cloudy, with a low around 65.

MONDAY – A chance of showers and thunderstorms, then showers likely and possibly a thunderstorm after 9am. Mostly cloudy, with a high near 78. Chance of precipitation is 70%.