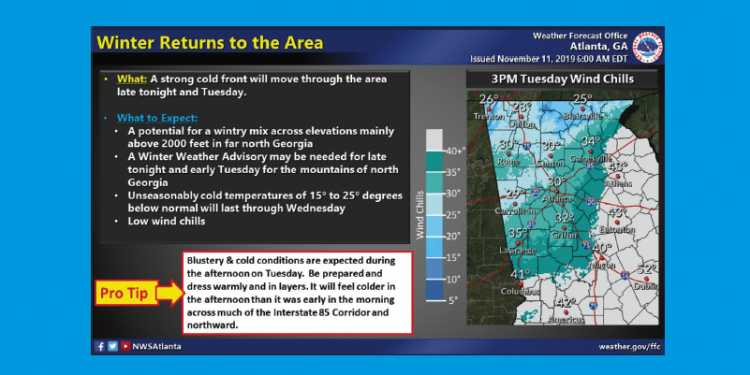 Old Man Winter plans to make an appearance this week in Georgia and the Coweta County area. Enjoy today’s high of 66 degrees, because a temperature drop of some 42 degrees will take place between today and tomorrow night.

A strong cold front will move through Tuesday with rain first, then temperatures falling into the 30s by 5 p.m. A Freeze Watch will be in effect from Tuesday at 7 p.m. until Wednesday at 10 a.m. In fact, the Wednesday morning low temperature is expected to be near 24 degrees.

Winds will be strong and out of the north as the cold front moves through. Expect the wind to be around 15 mph, gusting to 30 on Tuesday before settling down on Wednesday.

Clear skies move in Wednesday with highs the remainder of the work week in the mid-40s to low-50s. Lows Thursday and Friday mornings will be 29 and 35 degrees, respectively.

Below is the day-by-day forecast as of 6 a.m. Monday:

MONDAY – Mostly sunny, with a high near 66. Calm wind becoming southwest around 5 mph in the afternoon.

TUESDAY – Showers, mainly before 11am. Temperature falling to around 37 by 5pm. North wind around 15 mph, with gusts as high as 30 mph. Chance of precipitation is 90%. New precipitation amounts between a tenth and quarter of an inch possible.