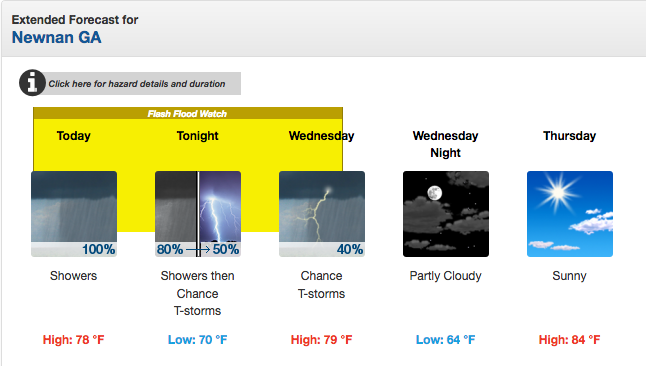 The National Weather Service in Peachtree City has issued a Flash Flood Watch for Coweta, Fulton, Forsyth and Heard Counties.

The Flash Flood Watch goes into effect at 8 a.m. today and ends at 2 p.m. Wednesday.

From the NWS: “Rainfall associated with Tropical Depression Ida will overspread much of north and central Georgia today and into Wednesday. Three to five inches of rain is expected across the flash flood watch area with isolated higher amounts possible. As the remnants of Idamoves through, additional bands of rainfall may cause training of storms through Wednesday that may lead to additional flash flooding concerns.”

In addition to the Flash Flood Watch, Ida will produce South winds at 15 mph with gusts to 25. And the possibility of an isolated tornado embedded in some of the outer bands of the storm that are moving through Georgia exists.

Below is the 24-hour forecast for Coweta. For more weather information, visit: NWS Newnan Page.

TODAY – Showers and possibly a thunderstorm. High near 78. South wind around 15 mph, with gusts as high as 25 mph. Chance of precipitation is 100%. New rainfall amounts between 1 and 2 inches possible.

TONIGHT – Showers and possibly a thunderstorm, mainly before midnight, then a chance of showers and thunderstorms after midnight. Low around 70. South wind 10 to 15 mph, with gusts as high as 20 mph. Chance of precipitation is 80%. New rainfall amounts between a half and three quarters of an inch possible.

WEDNESDAY – A 40 percent chance of showers and thunderstorms, mainly after 9am. Mostly cloudy, with a high near 79. West wind around 10 mph, with gusts as high as 15 mph.