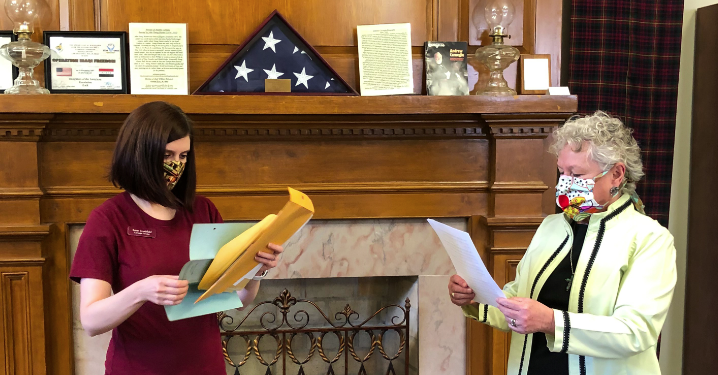 Rep. Smith says, “In the late 1980s, I served as chairperson of the Carnegie Library of Newnan and the new Newnan Coweta Public Library on Hospital Road…Most of the historic items survived the transition, but some paper documents were never found, until now. In sorting through my husband’s possessions, I found [these] documents.”

The documents included January 14, 1926, Covenant and Agreement between Mrs. B.T. Thompson (Mother of Charles L. Thompson) and Mrs. Lucile T. Jones with the Trustees of the Carnegie Library of Newnan, several letters of the Carnegie Library of Newnan business transactions over the years including WWII preparations, and the 1987 City of Newnan’s amended ordinance in order for Newnan to jointly participate with the Coweta County Government in creating the Newnan Coweta Public Library.

“We are very excited that Rep. Lynn Smith found these wonderful historical documents,” says Carnegie Library Director, Susan Crutchfield. “These are important items in the history of the Carnegie Library and the Coweta Public Library System. The signatures alone on the Covenant and Agreement are fascinating with familiar Newnan names. There is also a budget included from 1941, and it is really interesting to see the different costs of goods at that time. These documents are a true treasure, and we are so thankful to Rep. Smith for providing these to us.”

The newly found documents are on display at the Newnan Carnegie Library, and we invite the public to come by and view them during our normal operating hours Monday – Friday from 10 a.m. to 4 p.m.