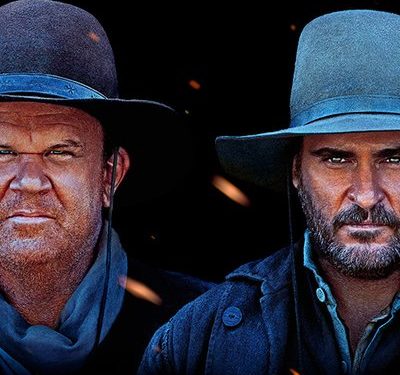 The Sisters brothers are Charlie (Joaquin Phoenix) and his older sibling Eli (John C. Reilly).  To put it bluntly, they kill people. And they aren’t bad at it. As hired guns in 1850s Oregon, they have come into the employ of the Commodore (Rutger Hauer), a shadowy gangster of sorts, who uses the brothers as his chief enforcers. When the Commodore sends them out to hunt and likely kill Hermann Kermit Warm (Riz Ahmed), the brothers embark on horseback through mountainous terrain and several developing towns.

“The Sisters Brothers” is one of the best Westerns I’ve seen in some time. Even though the thrust of the story is very heavy, and the violence abundant, the film is also funny and biting.  The comedy naturally evolves fitting the otherwise horrific moments.

Exploring the intersecting themes of fellowship, brotherhood, and friendship in a sustained and compelling way, the relationships develop meaningfully throughout the story.  It’s touching how true and loyal Eli is to the people (and animals) in his life that he trusts. Reilly, with his big baby face, oafish mannerisms and awkward gait is absolutely perfect for the role, which might be his best to date.  In a movie with four leading men, Reilly is the standout, the star, and should be recognized for his work. “The Sisters Brothers” is one of the year’s best films.

A Star is Born – Fix Rating

This one will undoubtedly factor into the end of the year awards races.  And for Lady Gaga, who was already a household name for her voice, she steps out fully, as both a musician and an actress delivering an award-worthy performance.

“A Star is Born” is Bradley Cooper’s reimagining of the famous Hollywood property that has been made now four times.  In this telling, Cooper (also writing and directing here) plays alcoholic country rock superstar Jackson Maine, who discovers singing talent Ally (Lady Gaga) and gives birth to her career.  The two fall in love, but when Ally’s career takes off and Maine’s crashes, the question is whether their relationship will survive.

With great performances and a soundtrack likely to be a hot seller, “A Star is Born” is grand Hollywood entertainment featuring terrific musical and acting performances.

In the film, Kevin Hart plays Teddy Walker, an arrogant fast-talker, who masks his learning disabilities with an endless sarcastic stream of jokes.  It’s that approach that keeps him from completing high school. And years later, after making his mark as a top salesman of outdoor barbecue grills, he realizes that in order to advance his career, he has to get his general education diploma (GED).  This means a trip to night school is in order. Once enrolled in an evening GED program, Teddy encounters his old high school nemesis, Stewart Paterson (SNL alum Taran Killam), who is now the school principal. Luckily for Teddy, the night school teacher, Carrie (Tiffany Haddish), is having none of Stewart’s authoritarian nonsense.

Really a staging ground for a series of extended slapstick gags and a continuous flow of one liners, the talented cast carries “Night School” despite the cartoonish story they all occupy.  Surprisingly, the jokes hit way more than they miss. But the misses are utterly leaden and almost derail the good natured comedy.

On the strength of the cast alone, “Night School” is, at times, a funny film, but unfortunately, it is far from a good one.

Already heralded a one of the year’s best films, by critics who saw the film in its festival run, “First Man” is directed by Damien Chazelle (“La La Land”) and stars Ryan Gosling. Expect this movie to be a strong contender in all major awards categories.  Featuring a spirited combination of g-force thrills and moving drama, this true story explores the life of astronaut Neil Armstrong (Gosling), as he prepares for the mission that made him the first man to walk on the moon back in 1969.

Bearing the same name as it 1978 predecessor that has been remade once already and spawn several uneven sequels, “Halloween (2018)” promises to be an honest to goodness throwback slasher following up on the seminal film that arguably gave birth to the entire genre.  And while there have been several sequels to John Carpenter’s famous “Halloween,” few have been able to capture the film’s scary pulse.

Early reviews have been very complimentary.  Surprisingly, “Halloween (2018)” comes from an unusual but talented team, headed by independent film expert director David Gordon Green and co-writer Danny McBride.  These guys aren’t associated with horror films and wouldn’t instantly come to mind when considering a sequel to such a landmark piece of genre filmmaking. But maybe that is just what the doctor ordered.

In this incarnation, Green and McBride bring back the original final girl Laurie Strode (Jamie Lee Curtis, reprising her iconic role).  The pitch is that this will be Strode’s final confrontation with the evil Michael Myers. It’s likely that we will get old-fashioned scares with some newfangled sensibilities, as this October shocker is bound to take a slash out of the weekend box office.

The View From The Loft