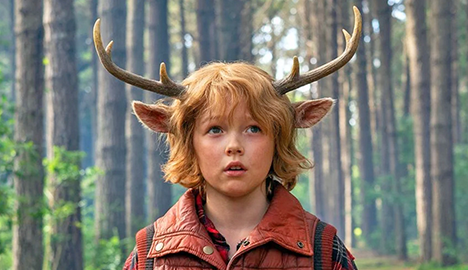 Cruella (In Theaters and Disney+) Fix Rating 7/10 – “Cruella” is a spinoff/prequel to both 1961’s animated “One Hundred and One Dalmatians” and 1996’s live-action “101 Dalmatians” (which had its sequel, “102 Dalmatians” in 2000). This time around, the title role is played by Oscar-winner Emma Stone, whose Cruella isn’t too interested in converting the spotted canines into coats, but she’s still focused on making it in the fashion world.

The story tells of young Estella’s transformation into Cruella. After losing her mother in a questionable incident involving vicious Dalmatians, Estella teams up with two creative thieves (played by Joel Fry and Paul Walter Hauser). While small cons and thefts are their stock-in-trade, Estella longs for a job in the fashion industry in 1970s London.

When her work is discovered by a top fashionista named The Baroness (Emma Thompson), she seems on her way to stardom. But, of course, the scheming Baroness has other plans for Estella and her talent.

This movie’s jukebox soundtrack covers many rock and roll and emerging punk tunes of the vibrant 70s. The fashion on display is joyfully of the time.

Stone chews up every scene and shines in sequences opposite the vampish Thompson. Of many varieties (including one with an eyepatch), the dogs are delightful, as is the supporting cast, which includes Hauser sporting a convincing English accent.

While no classic, it’s hard to resist the fashionable charms of this franchise in the making.

A Quiet Place Part II (In Theaters) – Fix Rating 7/10 – This sequel almost matches the sensational 2018 sneaky hit monster movie that had scared audiences whispering their praise. Picking up where the last one left off, we learn more about the alien invaders, who hunt primarily by sound.

Director and co-writer John Krasinski smartly flashes back to give us a peek at the tumultuous arrival. These opening sequences are terrific and well-worth seeing on the big screen.

In “Part II,” the surviving members of the Abbott family are forced to leave the relative safety of their farm and investigate. Naturally, they take the youngest member, a baby, along with them cleverly sealed in a noise-proof basket. And they don’t forget their secret weapon against the invaders—a modified hearing aid that gives the monsters a killer earache when coupled with an amplifier.

Krasinski, who briefly appears in the film’s impressive opening, relies on actor Cillian Murphy to step into his shoes. Murphy plays a neighbor who must help the Abbotts battle the deadly creatures. While Emily Blunt as Evelyn is the take-charge matriarch of the family, her deaf daughter, Regan (Millicent Simmonds), once again demonstrates unique resourcefulness. And in Blunt and Simmonds, “Part II” gets two strong female heroic performances.

Don’t expect this to be the end of the “Quiet Place” saga; these things commonly come in threes, which means that a concluding installment in a trilogy is envisioned.

Sweet Tooth (Season 1, June 4) – These days, comic book material’s best adaptations often involve fringe characters that later become household names. “Sweet Tooth” is a DC Comics’ Vertigo imprint that focuses on Gus (Christian Convery), a young deer-boy hybrid living in a post-apocalyptic future. When a mysterious virus strikes the Earth, people begin to evolve, merging with nature. But the non-hybrids suspect that the evolution may be the cause of the virus. Gus journeys from a forest with his defender Tommy Jepperd (Nonso Anozie), traveling a long distance in hopes of finding a new safe place. Along the way, they encounter dangers and other hybrids.

Sir! No Sir! (June 15th) – It’s good to see that Netflix has programmed David Zeiger’s excellent documentary about the activists who engaged in the complicated process of convincing the US government to withdraw from Vietnam.

Raya and the Last Dragon: (June 4) Fix Rating 8/10 – This is a great animated adventure told in the classic Disney style. The story has Raya teaming up with the last dragon to restore balance and peace to their world.

Loki (June 9) – Loki has appeared to die many deaths, but in “Avengers: Infinity War,” it appeared that he was dead dead. But, of course, in the multiverse, does anyone really die?  This weekly series has an alternate version of Loki (once again, played with gusto by Tom Hiddleston), who is taken in by the Time Variance Authority (yep, the TVA). This organization monitors the timeline from outside it. To save his skin, Loki is recruited to travel through time and make needed repairs. Hiddleston, who is terrific in the role, gets to play Loki as a kind of good guy secret agent. But, of course, most audiences prefer Loki in bad-boy mode; so, don’t expect his personality to change completely.

In the Heights: (June 11) – Critics can’t stop saying good things about this musical. While it’s going to be available on streaming, “In the Heights” screams, “see it on the big screen.” This film is an adaptation of the famous stage musical written by Quiara Alegría Hudes and Lin-Manuel Miranda. The story follows the colorful life of a Washington Heights bodega owner named Usnavi (Anthony Ramos).

Marvel’s M.O.D.O.K: (all ten episodes streaming now) Fix Rating 6/10 – Another fringe but classic player in the comics universe gets the series treatment. M.O.D.O.K. stands for Mental/mobile/mechanized Organism Designed Only for Killing. Although the character might have a serious side, especially as to killing, this HULU stop-motion animated series takes a decidedly comedic approach. Comedian Patton Oswalt lends his voice talents to M.O.D.O.K. It’s uneven, but it should squeeze a few chuckles from the average comic book fan.

Lisey’s Story (Streaming June 4) – This Apple series is notable for its director, Pablo Larraín (see “Jackie”), and its writer, Stephen King, who adapts his novel. The intriguing story has widow Lisey (Julianne Moore) dealing with the death of her husband (Clive Owen). When mysterious people come around interested in her husband’s writings, Lisey must unravel a mystery that threatens her safety.

The Killing of Two Lovers: (In theaters) Fix Rating 8/10 – Excellently shot and directed drama is told on a knife’s edge as a couple confronts the end of their marriage. “Lethal Weapon’s” Clayne Crawford is terrific as a husband and father who can’t handle the breakup. This one is a tense drama that feels like a thriller.

The Conjuring: The Devil Made Me Do It (June 4) – Shot in Newnan and the surrounding area, this “Conjuring” sequel looks to up the action quotient in this spooky series (the eighth installment in the franchise). Patrick Wilson and Vera Farmiga once again play Ed and Lorraine Warren, paranormal investigators. This time, the Warrens investigate a murder suspect, who claims demonic possession as a defense.

The Music: Local and Live in June