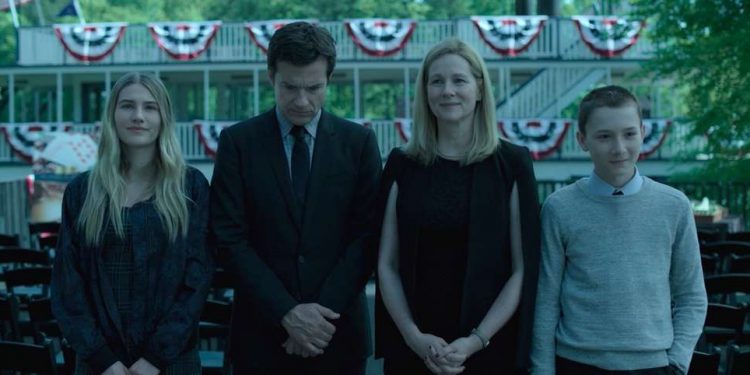 What to Binge: Ozark – Season 2 premieres on the streaming giant on August 31, which gives you plenty of time to binge season 1. In the show Jason Batman and Laura Linney play the Byrdes, a couple who escape with their children to the Ozark mountains fleeing a drug cartel. Bateman is Marty, a financial advisor, who has perfected the art of laundering drug money. But when his partner steals from the cartel, Marty is forced to move to Missouri, of all places, to hide. Of course, the cartel finds him, and Marty has to start laundering again to survive. Season 1 is really good and it gets better and better with each episode. For locals, this show was shot in Woodstock and Lake Allatoona, as Georgia doubles for the Ozarks.

Worth Checking Out: Insatiable – Another Netflix original, available on August 10, this one was shot in Newnan. “Insatiable” is billed as a coming of “rage” story. It follows a disgraced, dissatisfied attorney-turned-beauty pageant coach, whose latest client is a vengeful, bullied teenager. The naive coach has no idea what he’s about to unleash upon the world.

What Movie to Watch: Silverado – Available August 1, having been cut except as a dead body from director Lawrence Kasdan’s hit “The Big Chill,” Kevin Costner got paid back by Kasdan, who cast the rangy, good-looking actor as the goofy, gunslinger Jake in this incredibly entertaining Western. The familiar story of a group of friends uniting to battle injustice in a small town gets a jolt from hip writing and an all-star cast. In addition to Costner, who won our hearts instantly, Kevin Kline leads the collection of heroes, with Danny Glover letting his fists do most of the talking. A definite high point of the genre in the 1980s, this one is a great way to spend a Sunday afternoon.

What to Avoid: Ultraviolet – Available on August 17, the only reason (at all) to waste time watching this one is to prepare for the “How Did This Get Made” podcast episode about the film. After finding a measure of success with the interesting science fiction actioner “Equilibrium,” writer/director Kurt Wimmer went on to direct this miss in 2006, which, to date, was his last directorial effort. To be fair to Wimmer, his writing career has continued with varying degrees of success, but “Ultraviolet” is a messy, CGI adventure. The story has Violet (Milla Jovovich) infected with a virus that gives her powers. In the future, the world is dominated by a race of vampire-like creatures known as hemophages, and Violet must protect a boy who may carry antigens that will destroy the hemophages. Apparently, the cut of the film that was released made the story incomprehensible, but either way, this one was snake-bit.

What to Binge: Tom Clancy’s Jack Ryan: Season 1 – Hitting Prime on August 31, this new imagining of Tom Clancy familiar hero is a big gamble for Amazon. Of course, it really helps that it stars John Krasinski, the director/actor who just had a major box office triumph with “A Quiet Place.” In “Jack Ryan,” Krasinski plays a younger version of the iconic character. He’s an up-and-coming CIA analyst, who is, naturally, thrust into a field assignment where he uncovers a pattern in terrorist communication. And, of course, Ryan’s discovery launches him headlong into the center of a dangerous mission. Fans should dig into this one, because Amazon has already greenlit season 2.

What Movie to Watch: Hoosiers – Perhaps, the greatest sports film ever, Gene Hackman plays the new basketball coach of a small town high school in Indiana. His past precedes him, causing the townspeople to be a bit skeptical of his methods, which includes enlisting the help of the town drunk (Dennis Hopper). Nominated for two Oscars, including a best-supporting nomination for Hopper, which re-launched his career. Highly recommended.

What to Avoid: Teen Wolf Too – Fans of the mildly entertaining, and hopelessly dated 1985 film “Teen Wolf,” have no reason to check out “Teen Wolf Too.” Bearing no resemblance to the popular MTV television series, “Too” is about Todd Howard (Jason Bateman), whose college experience gets a boost when he wolfs out. Instead of basketball, the sport of the moment is boxing. Sadly, James Hampton, the actor who was so good playing the father in the first film, returns to play Todd’s uncle. This one is of note for Bateman’s feature film debut.

What to Binge: Castle Rock – The Stephen King multiverse gets a nice budget in this handsomely mounted series. After two episodes, I’m hooked, but I’m a bit of a junkie. The story follows death penalty attorney Henry Deaver (“The Knick’s” André Holland), as he travels back home again to investigate the mysterious appearance of a young man (“It’s” Bill Skarsgård) hidden away in Shawshank Prison. The town, which plays a role in many of King’s novels (it the place where Johnny catches the strangler in “The Dead Zone,” for example), is a major character here. Sissy Spacek (who played “Carrie”) plays Deaver’s mother.

What Movie to Watch: Mother! – Available on August 26, this is one divisive film. Critics and audiences were sharply divided over Darren Aronofsky’s experimental horror/drama starring Jennifer Lawrence. A kaleidoscope of imagery, Lawrence plays a pregnant young woman married to a writer played by Javier Bardem. The couple has recently purchased an isolated mansion that they are restoring. Their relationship is tested when uninvited guests mysterious arrive and really strange things start happening. Strange is the word here, as Aronofsky indulges his weird side exploring religious and transcendental themes. I found it oddly interesting and, certainly, not boring.

What to Avoid: Be Cool – If you want to watch a good Elmore Leonard adaptation, watch Tarantino’s “Jackie Brown” (which is available on streaming), or word is that EPIX’ “Get Shorty” series is very good. But “Be Cool” is awful! The uninspired follow up to the 1995’s excellent “Get Shorty,” the story is the continuing adventures of ex-mobster Chili Palmer (John Travolta), as he branches out in Hollywood, getting involved in the music industry. Dwayne Johnson appears in an early role credited as “The Rock.” It would be cool to take a pass on this one.

A devastating, authentic portrait of divorce and obsession, writer/director Xavier Legrand’s debut feature is a stunner.

Miriam (Léa Drucker) and Antoine (Denis Ménochet) are locked in a contentious divorce and custody battle. Their youngest child Julien (Thomas Gioria) is afraid of his father, and Miriam goes to great lengths to avoid contact with Antoine. Is she alienating the children from their father out of personal animus? Or does Julien know something that we don’t?

Part of the magic of Legrand’s film is that it keeps you guessing. It challenges you not to take sides. By holding back and giving us very little of the past, the tension builds as we struggle to understand. “Custody” makes us feel the personal vexation of loss and the inability to move on.

After taking delivery of a self-destructing video, in which we learn that a new villainous organization is in the market for nuclear materials in order to build three bombs, the IMF is assembled to stop them. The stripped down team consists of Luther Stickell (Ving Rhames), Benji Dunn (Simon Pegg), and, of course, Hunt (Tom Cruise).

“Mission: Impossible – Fallout” is a propulsive viewing experience, captured at a true break-neck pace, even if the story is impossibly foolish. And the film never really gives you a breather, as the closing sequence will have you hanging on the edge of your seat.