The Film Fix: Review of Aladdin, plus selects from Netflix, Amazon, Hulu, HBO 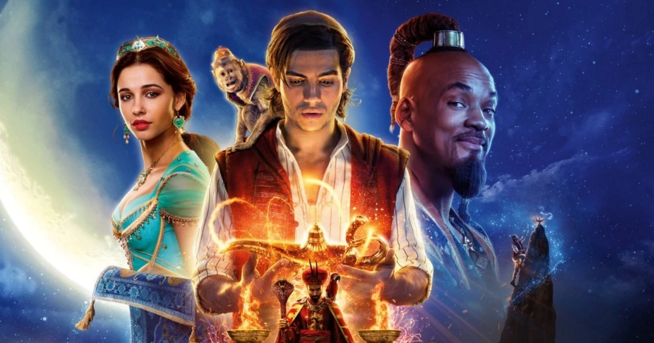 Below are reviews of both big-screen and streaming options fans will have this month.

It sure ain’t “Dumbo.” Disney’s live-action adaptations of its classic animated catalogue hit a low point with Tim Burton’s flying elephant story released in March.  But take heart, “Aladdin” is much better.

The 1992 “Aladdin” was a huge hit and won Oscars for best song, “A Whole New World,” and for its original score.  Thankfully, the classic music that worked so well with hand-drawn animation is preserved in director Guy Ritchie’s enthusiastic and reverent retread.  The script, written by John August and Ritchie, loses its momentum with the perfunctory action-packed conclusion, but the musical moments are wonderful.

The story has thief Aladdin (Mena Massoud) falling in love with princess Jasmine (Naomi Scott), while attempting to save the kingdom from the evil Jafar (Marwan Kensari).  And, of course, Aladdin gets help from a kind genie (Will Smith). The cast is solid, as the lead couple has the right, youthful, romantic chemistry. Scott’s singing voice is a real standout.  “Speechless” is a recurring tune, and Scott passionately delivers the “I won’t be silenced” lyric at a time when that line has special meaning.

The effects that morph Smith into the genie are uneven, but clearly cognizant of this problem, throughout much of the film, the production has Smith appear in his normal form with his real skin tone intact.  He’s charming in the role made famous by the late Robin Williams. And Smith’s often freakish appearance and flamboyant attitude are reminiscent of Williams’ iconic performance. For the most part, Smith makes the part his own, while not insulting the master who first brought it to the screen.

Regardless of the mediocre story that trades on the goodwill that came before it, “Aladdin (2019)” has joyous moments, and for young viewers should be, at times, delightful family entertainment.

What to binge: Black Mirror: Season 5 (June 5) – After last year’s choose-your-own-adventure “Black Mirror: Bandersnatch,” we get an entire new season of the science fiction anthology series that is always utterly bingeable.  And while the fight over Chooseco’s trademark weaves its way through the courts, you can still watch the stories the old fashioned way, well, on continuous play.

What movie to watch: Spider-Man: Into the Spider-Verse (June 26) Fix Rating 9/10 – This Oscar winner for best animated feature is a joyous and super-saturated superhero celebration.  The movie comes from the pen of Phil Lord, the writer who helped bring Lego toys fabulously to the big screen. His complex script is an innovative combination of the various incarnations of characters inspired by Peter Parker and his wall-crawling alter ego created originally by the late Stan Lee. “Spider-Man: Into the Spider-Verse” is flat-out terrific and should bring a tear to the eye of anyone who grew up immersed in all things Spidey.

What to avoid: The Zookeeper (June 26) – This 2011 Kevin James vehicle is pretty awful.  The story involves a dutiful, but lonely, zookeeper (James), who woos a woman (Rosario Dawson) with the assistance of talking animals.  Avoid!

What to binge: Documental: Season 3 – Okay, this won’t be for all tastes, but it is certainly a show that offers something completely different.  From the mind of Japanese comedian Hitoshi Matsumoto (director of “Big Man Japan”) gathers together in one room 10 of his fellow comedians for a unique competition.  The entry fee is one million yen (around $9,000) and the one comic who is the last to laugh receives ten million yen. It’s a funny combination of “Last Comic Standing” and “Big Brother.”

What movie to watch: AIR: The Musical (June 30) – This is a special movie—an independently made musical directed Jeremy Osbern, the gifted cinematographer who shot “The Fat Boy Chronicles” back in 2010 in Newnan.  Shot on a very small budget and on actual film, “AIR: The Musical” is finally finding its way to a larger audience. The story is about three people who feel out of place in the world and long to find a connection with someone else.  This humble and ambitious production is to be admired. Fans of “La La Land” should check this one out.

What to avoid: Dragon Blade (June 30) – This Chinese production is completely bonkers.  The unintelligible story involves the defense of the Silk Road from an invading force of Romans.  It’s ridiculous on many levels, not the least of which is the casting of John Cusack as a Roman soldier name Lucius, who has an accent like, well, John Cusack.  Adrien Brody is the heavy and the movie’s hero is none other than Jackie Chan. “Dragon Blade” is so bad that it was featured on the popular podcast “How Did This Get Made?,” which might make you check it out, but I suggest watching anything else.

What to binge: The Handmaid’s Tale: Season 3 (June 5) – Departing from and expanding on Margaret Atwood novel, “The Handmaid’s Tale” has become something of a lightning rod in this politically charged time.  And season 3 has June (Elisabeth Moss) returning to Gilead, because as she says in the latest trailer, there’s no such thing as an escape. Expect lots of action, as the oppressive regime has to cope with growing unrest.

What to binge: Catch 22 (streaming now) – George Clooney’s take on the famous Joseph Heller novel is funny and engaging.  It’s not nearly as out there as the Mike Nichols take on the material back in 1970, but there is plenty of absurdity along with a grounded take on the horrors of war.

What to watch: Chernobyl (new episodes every Monday) – This show is really a tough watch, but it’s rewarding.  Chronicling the 1986 nuclear disaster in Russia, this docudrama both celebrates the heroic people and exposes the horrors associated with a Communist government.  And while you can binge this show on the HBOGo app, watching one episode per week, appointment TV-style, is all I could take, because it’s often depressing.

Toy Story 4
“Toy Story 3” the Oscar for best animated feature, and despite criticism that there was no more story to be told, it has proved to be required viewing.  After 9 or so years, another “Toy” story is upon us. Focusing on a new toy named “Forky” (voiced by Tony Hale), the gang goes on a road trip that is bound to tell us more about ourselves than about the toys.

All is True – Fix Rating 6/10
This is director Kenneth Branagh’s love letter to the Great Bard.  The story deals with the final years in the life of WIlliam Shakespeare (played by Branagh) after the burning of the Globe Theatre in London. He’s estranged from his older wife (Judi Dench) and his daughters, while still grieving the death of his son years earlier.  The mysteries revealed are provocative, but ultimately the story is more interesting than entertaining. Still, with Branagh and Dench, it’s hard to go wrong.