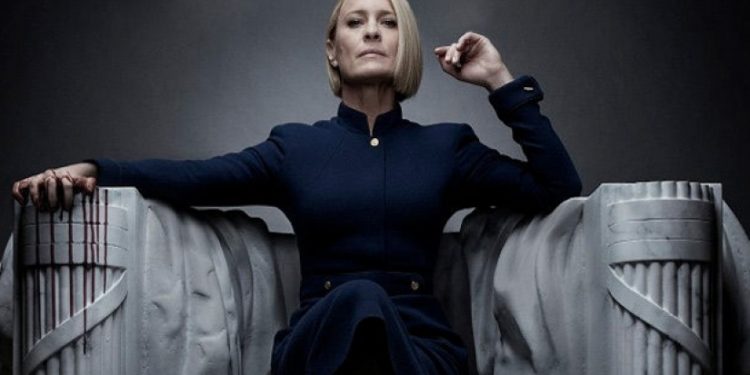 Check out the below list of streaming and big screen options you’ll have during the month of November.

NETFLIX
What to Binge: House of Cards (Season 6) – President Frank Underwood (Kevin Spacey) is dead and his powerful wife Claire (Robin Wright) takes over.  This delicious, ground-breaking Netflix series was in chaos after revelations of star Spacey’s alleged misbehavior broke in the news.  Instead of ending the show, the lead was written out, which gave Wright, who was already a significant co-star, a chance to carry the series.  Expectations are high, as this series final wrap-up gives us a woman in charge of our nation.

What Movie to Watch:  The Other Side of the Wind (November 2) – The unfinished film of Orson Welles can finally be seen.  A must for film buffs, the story is a satire of Hollywood in which a director (played by John Huston) comes out of a self-imposed exile in an attempt to complete a unique movie. The eclectic cast includes director Peter Bogdanovich, Susan Strasberg, Cameron Mitchell, Edmond O’Brien and others from cinema’s past.

What to Avoid: Transcendence (November 1) – Wally Pfister is a great cinematographer (2011 Oscar winner for his work on “Inception”), but this turn as a director just didn’t come together.  The story concerns Will Caster (Johnny Depp), a computer scientist who develops an advanced form of artificial intelligence. But when Caster discovers he’s dying, his only way to continue living is to upload his mind into the computer system.  Naturally, this leads to predictably evil and silly results.

HULU
What to Binge: Rocky franchise – As preparation for the theatrical release of “Creed II,” you can visit “Rocky” from 1976 through 1990.  And with the reemergence of Ivan Drago (Dolph Lundgren) in this new “Creed” film, pay close attention to “Rocky IV.” And while you’re at it, on November 19, you can even watch “Creed,” which is a special film that effectively rebooted the franchise.

What Movie to Watch: On Her Majesty’s Secret Service (November 1) – If you’re going to revisit a Bond film this holiday (which has become something of a tradition), this unusual franchise entry is worth checking out.  Starring Australian George Lazenby in his only appearance as James Bond, this very hip installment has 007 matching wits with the evil Blofeld (played by Telly Savalas).  The spirited movie has Diana Rigg playing Teresa “Tracy” Draco, the only woman to marry Bond.

What to Avoid: Stigmata (November 31) – This exorcism film is pretty weak.  The story has a priest (played by Gabriel Byrne) investigating a woman (Patricia Arquette), who appears to be experiencing a type of possession that manifests itself as a mysterious stigmata.  She bleeds from her hands and feet and exhibits the familiar tell-tale signs that an evil spirit is messing with her. With all the better demonic possession films available, this one is at the bottom of the heap.

AMAZON
What to Binge: Homecoming (Season 1, November 2) – Julia Roberts stars in this mysterious thriller from Sam Esmail (“Mr. Robot”).  Years after participating in the administration of a facility called Homecoming that helps soldiers transition into civilian life, Heidi Bergman (Roberts) finds herself in the middle of a government investigation.  And then she realizes that what she thought she was participating in may have been something sinister. A paranoid thriller vibe is definitely evoked from the edgy trailers. The cast includes, among other popular actors, Bobby Cannavale, Shea Whigham, and Sissy Spacek.

What Movie to Watch: Terms of Endearment (November 1) – This multiple Oscar winner from director James L. Brooks adapted from a novel by Larry McMurtry is a perfect film.  The story of Aurora (Shirley MacLaine) and her daughter Emma (Debra Winger) contains no false notes. And one scene in particular guaranteed MacLaine the best actress award.  Jack Nicholson fans should also catch this one as he too won the golden statue for his work as the salty astronaut next door. A bit of a tear jerker, “Terms of Endearment” is one of my favorite films.
What to Avoid: Assault on Precinct 13 (2005 version, November 1) – This is a flat remake of John Carpenter’s terrific 1976 action/thriller.  It’s a movie that really shouldn’t exist. I’m not a hater, but get your own title, and make your own movie.  Both stories share similar contained narratives as a police precinct is besieged, and a tiny group of officers and criminals must band together to survive.  The 2005 film has Ethan Hawke as the hero and Laurence Fishburne as the heavy. It’s slick but fails to capture the charm and social satire that Carpenter was able to subversively weave into his near classic.

ARTHOUSE CORNER
Suspiria (review)
Director Luca Guadagnino may have been the wrong guy to tackle the remake of Dario Argento’s horror classic “Suspiria.”  Guadagnino, who last year gave us the wonderful “Call Me By Your Name,” leans heavily into the arty elements of the source material with inconsistent results.  This artistic approach yields some interesting images and sequences, including one of the most repulsive kill scenes I’ve ever watched, But, as a whole, the film is a failure.

The narrative has a young American dancer named Susie Bannion (Dakota Johnson), traveling to Berlin in the 1970s to join a dance school run by Madame Blanc (Tilda Swinton). The school is really a front for a coven of witches.  The naive Susie might be part of some kind of master plan. Meanwhile, Patricia (Chloë Grace Moretz), one of the school’s former dancers, is being treated by Dr. Josef Klemperer (also played by Swinton in heavy costume and makeup) for what might be a delusion disorder.  But Dr. Klemperer isn’t so sure that Patricia’s delusions are all just in her head.

The 1977 original “Suspiria” was an odd one, featuring strange over-dubbing, a heavy synth score, a laughably bad puppet but potent bat attack, creepy characters, an attic crawling with maggots, and sumptuous, vivid production design. That film has a terribly dated ending, but one that made some sense.  Guadagnino’s version, which is a complete rewrite by David Kajganich (who is next writing the new “Pet Sematary”), is almost indecipherable. The conclusion is ludicrous.

THEATRICAL TEASER
Green Book (review)
This year’s “The Help,” “Green Book” is hugely entertaining.  Based on a true story, the film follows the evolving relationship between Italian-American bouncer Tony Lip (Viggo Mortensen) and classical pianist Don Shirley (Mahershala Ali). The two men go on a musical tour through the Deep South in the 1960s.  Shirley hires Tony, because he has an uncanny ability to handle difficult situations. And given the racially charged times, Shirley can certainly use Tony’s muscular methods. They learn from each other over the two-month tour, as they are forced to confront intolerance.

The performances are both award-worthy.  Mortensen, we appears to have gained weight for the role, is absolutely fantastic as the lug-headed, but street-wise tough guy.  And Oscar-winner Ali could very well find himself nominated again, playing the refined musician. This is really a wonderful movie, and it’s directed by Peter Farrelly, one-half of the comic directing duo that brought us “There’s Something About Mary.”