The Film Fix: What’s streaming and in theaters in July 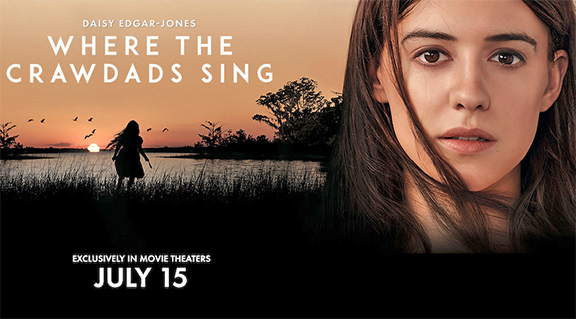 Thor: Love and Thunder (July 8, 2022) – Following an advanced screening last month, Atlanta critics were largely mixed on this one. Oscar-winning writer and director Taika Waititi returns to the MCU after having shepherded “Thor: Ragnarok” to Herculean success in 2017. This time around, Thor (Chris Hemsworth) is called out of retirement to batter Gorr the God Butcher (Christian Bale). As he gets in shape, he assembles a team that includes his pal Krog (voiced by Waititi) and his ex-girlfriend Jane Foster (Natalie Portman), who happens to wield the magical hammer the Mjolnir capably.

Where the Crawdads Sing (July 15, 2022) – This is an adaptation of the bestselling novel by Delia Owens. Kya Clark (Daisy Edgar-Jones) is a town oddity, having been abandoned by her family and left to raise herself in the marshlands of the Deep South in the 1950s. When a popular young teen is found murdered, his link to Kya makes her the number one suspect.

Nope (July 22) – Jordan Peele (the directing auteur responsible for the Oscar-winning “Get Out” and the terrific “Us”) returns with this horror-science fiction ode. From what could be gleaned by the film’s first two trailers, siblings OJ and Emerald Haywood (played by Keke Palmer and Oscar-winner Daniel Kaluuya) make a startling, possibly extraterrestrial discovery. They employ a washed-up filmmaker (played by Michael Wincott) to document everything. As Peele continues his provocative and successful filmmaking journey, one reminiscent of M. Night Shyamalan, one wonders if the otherworldly “Nope” will be his “Signs.”

The Bob’s Burgers Movie  (July 12) – After completing its profitable theatrical run, which rang up more than $33 million worldwide, the Belchers bring their feature-length adventure to the small screen. The story has the restaurant placed in jeopardy when a water main break creates a giant sinkhole in front of their business. But while Bob and Linda reach their wit’s end, the kids seek to solve a mystery that might save the day. This movie is the film adaptation of the beloved television series.

Stranger Things – Season 4: Part 2 (streaming now) – Part one of season 4 spent seven episodes (labeled “chapters”) setting up a big showdown with Vecna, the newest denizen of the upside-down world. Part two is just two chapters, both running feature-length. Can Eleven (Millie Bobby Brown) regain her abilities and fend off the evil Vecna? And will Joyce (Winona Ryder) and Hopper (David Harbour) escape Russia to return to Hawkins and help the cause?

Loot – No Fix Rating: 5/10 (New episodes streaming weekly) – Saturday Night Live alum Maya Rudolph leads this uneven series about Molly Novak, the wife of a billionaire named John (played by Adam Scott). When Molly and John divorce, she becomes one of the world’s wealthiest persons. At the same time, Molly fumbles through her next act, struggling to figure out what to do with her newly minted financial and personal freedom and her yacht full of cash.

“Loot” is a sitcom with dramatic elements, and creators Matt Hubbard and Alan Yang (see “Parks and Recreation”) can’t decide on a tone. Rudolph is undoubtedly up to the challenge and shows us how effective she can be in one particular episode where her character appears on the popular YouTube series, the Hot Ones. This unrelenting and ruthless sequence is a series highlight.

The Terminal List – Fix Rating: 6/10 (streaming now) – This show is an adaptation of a novel by Jack Carr. Amazon successfully covered similar ground with “Tom Clancy’s Jack Ryan.” But “The Terminal List” is destined to follow a similar path to the violent and dour Clancy adaptation “Without Remorse.”

And in keeping with that revenge tale (which, in full disclosure, I kinda liked), “The Terminal List” centers on a Navy SEAL seeking payback in the wake of a mission gone wrong. Episode one ends with a shocking action sequence that sets the severe tone of this Clancy adjacent series with “Jurassic World” and “Guardians of the Galaxy” star Chris Pratt in the lead.

Sniper: The White Raven – (limited theatrical and video on demand) – This “ripped-from-headlines” action drama centers on the Russo-Ukrainian War. After losing his family, Mykola (Aldoshyn Pavlo), a Ukrainian physics teacher, turns to the gun for revenge. Rising to the ranks of an elite sniper, Mykola targets a Russian sniper in a personal mission that could impact the overall conflict. Although bearing the “Sniper” title, “The White Raven” does not appear to be part of that series that began in 1993 and starred Tom Berenger.

Knowing that the recording is significant, Connie contacts journalist Paul (“First Cow” star John Magaro) in hopes of getting the word out without revealing her identity. Connie “borrows” the tape for the weekend, planning on returning it to her job on Monday.

The two decide to rent a room at a local vacation hotel and listen to the evidence together. Their best-laid plans are interrupted by several odd characters, including a busy-body hotel clerk (played with all thumbs by the always funny Richard Kind), a collection of hippies whose mind-expanding activities beckon Paul and Connie to join in, and a strange older couple who might be swingers.

“18 1/2” is an unusual, topical film of interest to indie film fans and folks fascinated by an alternate view of a dark moment in American history.

The Music: Local and Live in July