View From The Loft: ‘City of Homes, not APTs?’ 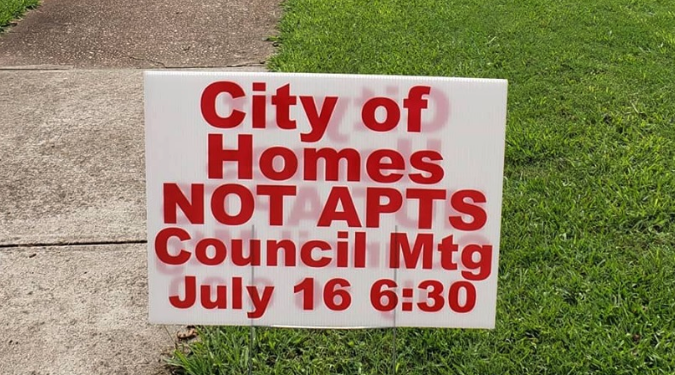 The first column I ever wrote for this publication was about historic preservation and how the adaptive reuse of buildings in historic areas is vital to the quality of life of a community.

I have been involved with historic preservation and downtown development for many years, so I’ll be the first one to advocate for careful oversight of any development or redevelopment that reduces the value of the built environment or ambience of a downtown or historic residential area.  Experience has taught me, however, that there is a delicate balance between maintaining the integrity of a historic community and just being opposed to anything anybody from the outside wants to do.

That’s why the “CITY of HOMES, not APTS” campaign got my attention.

I only know general facts about the proposed development at East Broad and the railroad so I’m not here to discuss the virtues of that particular proposal.  It’s the approach to the issue that I was amused by.

First, let’s define “HOMES.” In this context and after living here for a while, I think” HOMES” means more than 5,000 square feet, located within one square mile of the Newnan Square, built by the textile barons, restored or at one time restored and commonly referred to by the names of the families who lived there instead of by the street address.  I don’t think the campaign was focused on SummerGrove or Lake Redwine. By “APTS” I think they meant those high density, sheetrock things that are stacked on top of each other in the suburbs that have backlit signs, crape myrtles and fountains.

If my assumptions are wrong, I apologize.  I’m just making observations of the impression that was left.

When I came to Newnan, I was amazed at the lack of mixed-use development in the historic district and downtown.  The key to economic stability in any area, but especially in downtowns, is that people have to LIVE there. Cities like Greenville, SC and Savannah are proof of this.

Newnan does have beautiful houses, but it also has an inventory of grand houses that have been on the market, in some cases for years. That’s not an indictment, it’s just an observation that fewer and fewer people, even wealthy people, choose to live on that grand style anymore.  Unless it’s your hobby, it really doesn’t make much financial sense. A personal case in point … my daughter gave my Wedgewood china to Goodwill and she uses the silver whenever I polish it and bring it to her house. That’s not about money as much as it is about modern lifestyle.

On a personal note; I am retired from a major brokerage firm, I am now in the private jet business, I have restored 3 historic district houses in another city, we have a substantial household income, two luxury cars, a grand piano and 4 Persian rugs in, God forbid, an APARTMENT in downtown Newnan!

So, I am neither for nor against the proposed development downtown.  I just hope we will think through the message that is sent by “CITY of HOMES, not APTS”.  OH!, when the WALKING DEAD wants to use two blocks of downtown, that’s not a compliment.