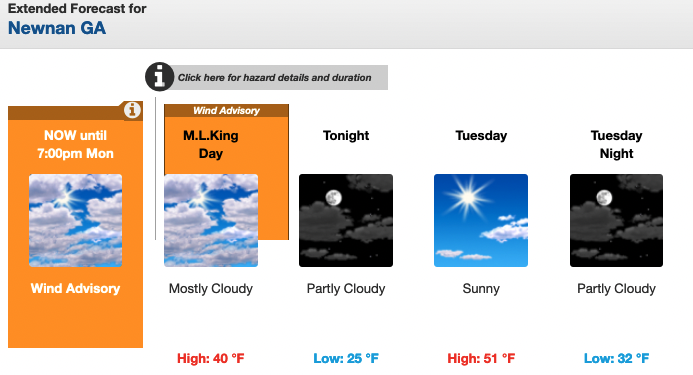 After flirting with a wintry mix here in Coweta County on Sunday, the National Weather Service in Peachtree City says the week will begin cold and another possibility of snow will cap the work week on Friday.

Monday’s high is expected to be only 40 degrees and mostly cloudy with Northwest wind at 15 mph, gusting to 20. In fact, the 6:30 a.m. temperature at the Newnan-Coweta Airport is 34 degrees with the West wind at 9 mph, making the Wind Chill feel like 27. The overnight low under partly cloudy skies will be 25.

A Wind Advisory remains in effect for Coweta County through 7 p.m. this evening. The National Weather Service says to expect West and Northwest winds at 15-20 mph with gusts as high as 35. These gusty winds can blow around unsecured objects and large tree limbs and some trees could be blown down and power outages may result.

Sunny skies return on Tuesday with a bit warmer temperatures as the high will be near 51. The warming trend continues on Wednesday with a high of 58 before a front moves through bringing a 90 percent rain chance Wednesday night and 30 percent on Thursday. Cooler temps follow with a high Thursday of 47.

Thursday night’s low of 26 precedes a chance of snow on Friday morning, then a rain/snow mix possibility midday before turning to all rain later in the afternoon.

Below is the extended forecast for Coweta. For up-to-date weather information, visit: NWS Newnan Page.

MONDAY – Mostly cloudy, with a high near 40. Northwest wind around 15 mph, with gusts as high as 25 mph.

MONDAY NIGHT – Partly cloudy, with a low around 25. Northwest wind 5 to 10 mph becoming light after midnight. Winds could gust as high as 20 mph.

TUESDAY – Sunny, with a high near 51. Calm wind becoming west around 5 mph.

WEDNESDAY – Partly sunny, with a high near 58. Light south wind increasing to 5 to 10 mph in the morning.

THURSDAY – A 30 percent chance of showers. Mostly cloudy, with a high near 47.

SATURDAY – Partly sunny, with a high near 38.

The Coweta County forecast for the work week from the National Weather Service in Peachtree City.

Deal Finder: Ways to save on rising ...