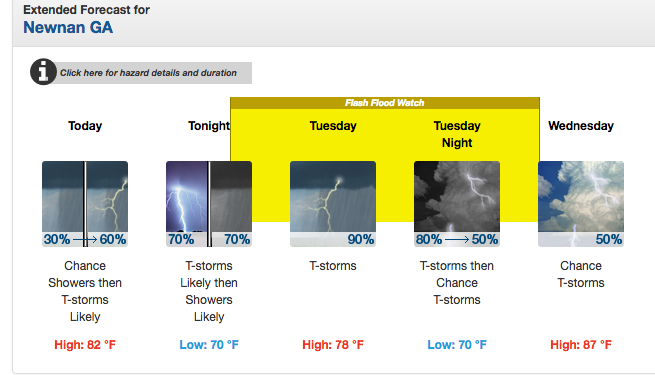 The arrival of rainfall from the remnants of Tropical Storm Fred and a Flash Flood Watch is on the Coweta weather agenda for the early portion of the work week, says the National Weather Service in Peachtree City.

Tropical rainfall associated with Fred will affect Coweta through Wednesday morning with heavy rain and possible flooding as the main hazards. Track projections as of 6 a.m. today have Fred’s path passing along the Alabama-Georgia state line Tuesday afternoon, leaving Coweta on the storm’s east side. As of this morning, the strongest winds here are expected to be from the East at 10-15 mph, with gusts as high as 20. Rain chances around midnight this evening increase to 70 percent, then to 90 percent on Tuesday, 80 percent Tuesday night and fall to 50 percent on Wednesday.

The high temperature today will be 82 degrees, dropping to 78 on Tuesday with Fred passing to the west, and back to 87 on Wednesday.

In addition, Coweta County and much of the area will be under a Flash Flood Watch beginning late tonight through Wednesday morning. The NWS says rainfall associated with Tropical Storm Fred will begin to move into North and Central Georgia early Tuesday morning and spread across the area through the day. Amounts of 2-5 inches of rain are expected through the flash flood watch, with some isolated heavier amounts. Heavy rainfall on top of likely saturated soils will lead to flash flooding. As Fred moves through, additional bands of rainfall may cause training of storms through Wednesday morning that may exacerbate or lead to additional flash flood issues.

After Wednesday, the remainder of the week will have a normal summer pattern with highs in the upper 80s and a chance for afternoon showers and thunderstorms.

Below is the day-by-day forecast (subject to change) from the NWS. And for more weather information, visit: NWS Newnan Page.

MONDAY – A slight chance of showers, then showers and thunderstorms likely after 11am. Mostly cloudy, with a high near 82. East wind 5 to 10 mph, with gusts as high as 15 mph. Chance of precipitation is 60%.

MONDAY NIGHT – Showers and thunderstorms likely before 11pm, then showers likely and possibly a thunderstorm after 11pm. Cloudy, with a low around 70. East wind 10 to 15 mph, with gusts as high as 20 mph. Chance of precipitation is 70%. New rainfall amounts between a quarter and half of an inch possible.

TUESDAY – Showers and possibly a thunderstorm before 3pm, then showers and thunderstorms after 3pm. High near 78. East wind 5 to 15 mph, with gusts as high as 25 mph. Chance of precipitation is 90%. New rainfall amounts between 3 and 4 inches possible.

TUESDAY NIGHT – Showers and thunderstorms, mainly before 8pm. Low around 70. South wind 5 to 10 mph, with gusts as high as 15 mph. Chance of precipitation is 80%.

WEDNESDAY – A 50 percent chance of showers and thunderstorms. Partly sunny, with a high near 87. Southwest wind around 5 mph.

THURSDAY – Showers and thunderstorms likely. Partly sunny, with a high near 87. Chance of precipitation is 70%.

FRIDAY – A 50 percent chance of showers and thunderstorms. Partly sunny, with a high near 87.

SATURDAY – A 40 percent chance of showers and thunderstorms. Partly sunny, with a high near 86.