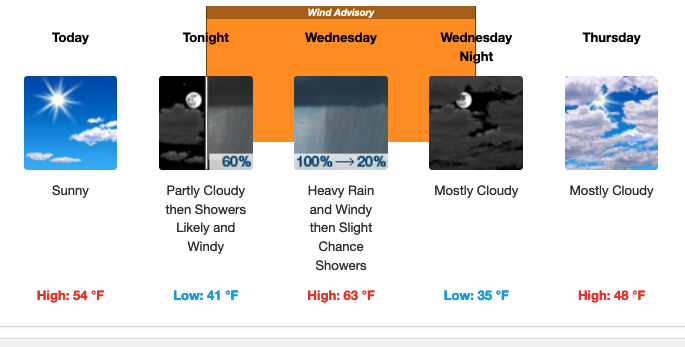 A fast-moving frontal system will move through Coweta County late tonight which has the potential to produce storms with possible damaging winds.

The system is forecast to bring some severe weather later today along southern Louisiana and the Mississippi and Alabama coast lines. That same system will bring showers and embedded thunderstorms from west to east into Georgia after midnight tonight.

Here in Coweta, the National Weather Service in Peachtree City says the time window for the heavy rain starts at 60 percent around 4 a.m. and up to 100 percent by 7 a.m. Wednesday. Rain chances then drop below 50 percent after 10 a.m.

In addition to the forecasted heavy rains, the National Weather Service has issued a Wind Advisory for all of North and Central Georgia, including Coweta County, which will go into effect at midnight tonight through midnight Wednesday night. Sustained winds of 15 to 25 mph are possible with gusts up to 40. Trees and tree limbs could be blown down and a few power outages may result.

Today’s forecast calls for sunny skies with a high of 54 which clouds increasing tonight. Wednesday’s high will be 63 with clearing later in the day while Thursday will be mostly cloudy with a high of 48.

Below is the 48-hour weather forecast from the National Weather Service in Peachtree City.

TODAY – Sunny, with a high near 54. North wind 5 to 10 mph becoming southeast in the afternoon.

TONIGHT – A chance of showers before 2am, then a chance of showers and thunderstorms between 2am and 4am, then showers likely and possibly a thunderstorm after 4am. Mostly cloudy, with a low around 41. Windy, with an east wind 10 to 15 mph increasing to 20 to 25 mph after midnight. Winds could gust as high as 35 mph. Chance of precipitation is 60%. New rainfall amounts between a quarter and half of an inch possible.

WEDNESDAY – Showers and possibly a thunderstorm before 11am, then a chance of showers. Some of the storms could produce heavy rainfall. High near 63. Windy, with a south wind 20 to 25 mph becoming west in the afternoon. Winds could gust as high as 40 mph. Chance of precipitation is 100%. New precipitation amounts between a quarter and half of an inch possible.

WEDNESDAY NIGHT – Mostly cloudy, with a low around 35. West wind around 15 mph, with gusts as high as 30 mph.