Weather: Sunny much of the week, rain moves in Wednesday night 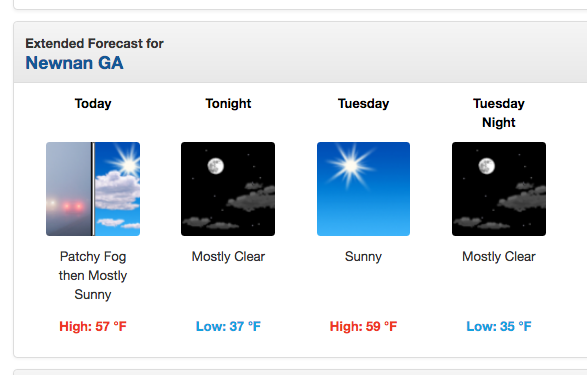 The Christmas week forecast has plenty of sunshine, some rain and possibly a wintry mix on Christmas Eve according to the National Weather Service.

After some patchy fog this morning, clearing skies prevail and will remain through Wednesday afternoon. Highs will be in the upper 50s and overnight lows in the 30s.

Isolated thunderstorms are possible across portions of north and central Georgia beginning overnight Wednesday and into Christmas Eve on Thursday. The primary threat will be occasional lightning and gusty winds. The rain chances for Christmas Eve during the day is listed at 90 percent with a high near 50.

The forecast gets a little interesting late Thursday and into Christmas Eve night as temperatures begin dropping. The National Weather Service says there is a potential for some wintry mix of precipitation across portions of north, and possibly central, Georgia late Thursday into early Friday. Check the forecast later in the week for more updates.

Christmas Day will be sunny and cold with a high of 40 degrees.

Below is the day-by-day forecast (subject to change) from the NWS:

MONDAY – Patchy fog before 11am. Otherwise, cloudy through mid morning, then gradual clearing, with a high near 57. Light northwest wind becoming west 5 to 10 mph in the morning. Winds could gust as high as 15 mph.

WEDNESDAY NIGHT – Showers and possibly a thunderstorm, mainly after 2am. Some of the storms could produce heavy rainfall. Low around 45. Chance of precipitation is 90%.

CHRISTMAS EVE – Showers and possibly a thunderstorm before 8am, then showers likely. Some of the storms could produce heavy rainfall. High near 50. Chance of precipitation is 90%.

CHRISTMAS EVE NIGHT – A 30 percent chance of showers before 8pm. Partly cloudy, with a low around 25.

Campanile’s Home Inside & Out: Holiday Storewide ...