Weather Week in Coweta: Mix of sun and rain in forecast 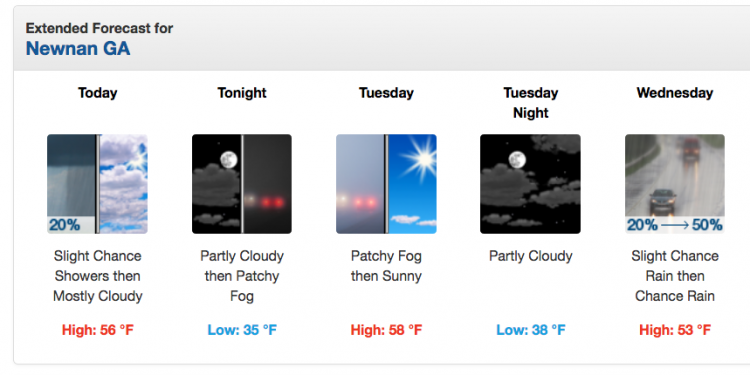 It’ll be a mixed bag of weather this week in and around Coweta County, according to the National Weather Service in Peachtree City.

Look for a combination of sunny and cloudy skies throughout the course of the work week. Rain chances early today, Wednesday and Friday with lots of sunshine on Tuesday and Thursday.

Temperatures will remain consistent with highs in the 50s and lows in the 30s.

Below is the day-by-day breakdown (as of 6 a.m. today, subject to change) from the NWS:

MONDAY – A 20 percent chance of showers before 11am. Cloudy, with a high near 56. Light southwest wind becoming west 5 to 10 mph in the morning. Winds could gust as high as 15 mph.

MONDAY NIGHT – Patchy fog after 1am. Otherwise, partly cloudy, with a low around 35. Northwest wind around 5 mph.

TUESDAY – Patchy fog before 9am. Otherwise, mostly sunny, with a high near 58. Northwest wind around 5 mph.

TUESDAY NIGHT – Partly cloudy, with a low around 38. Calm wind.

WEDNESDAY – A 50 percent chance of rain, mainly after 1pm. Mostly cloudy, with a high near 53. Calm wind becoming east around 5 mph.

THURSDAY – Mostly sunny, with a high near 54.