Weather Week in Coweta: Clouds, rain and highs in 70s 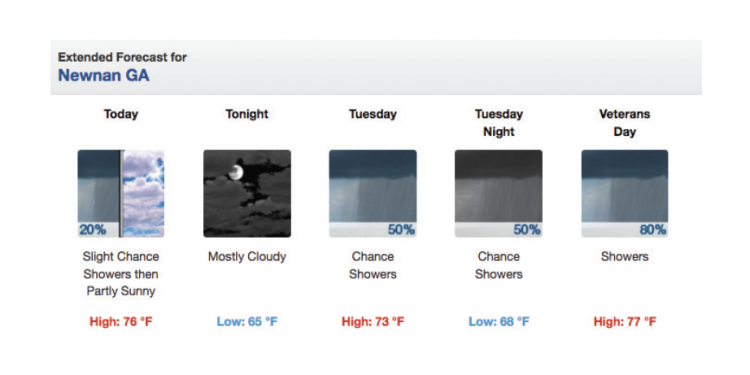 Coweta County can expect clouds, rain and highs in the 70s throughout the work week, according to the National Weather Service in Peachtree City.

Mostly cloudy skies will be the norm for much of the week, beginning today, which also includes a 20 percent rain chance.

Then an approaching cold front, mixed with moisture being pulled into the area as an indirect result from Tropical Storm-Hurricane Eta in the Gulf of Mexico, will increase the area’s rain chance. The forecast says the possibility of rain will go from 50 percent on Tuesday to 80 percent on Wednesday and finally to 60 percent on Thursday. Clearing will take place late Thursday and into Friday.

The day-by-day forecast (subject to change) is below from the National Weather Service:

WEDNESDAY – A chance of showers and thunderstorms, then showers and possibly a thunderstorm after 8am. High near 77. Calm wind becoming southeast around 5 mph. Chance of precipitation is 80%.

THURSDAY – Showers likely and possibly a thunderstorm before 8am, then a chance of showers. Partly sunny, with a high near 76. Chance of precipitation is 60%.

The week’s weather forecast for Coweta County from the NWS.

Safe and effective ways to clean up ...

Mr. Personality: November – the month to ...