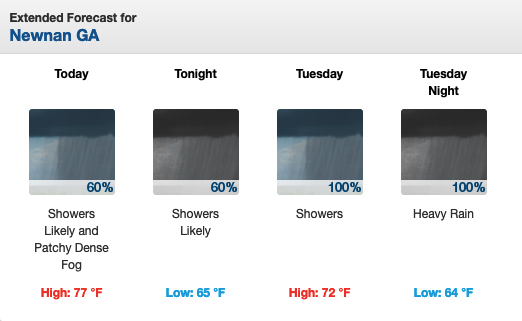 There’s no getting around it, rain and more rain is in this week’s extended forecast according to the National Weather Service in Peachtree City.

The reason is a strong, upper level trough which extends from the Lower Mississippi Valley and into the Great Lakes region. Coweta County and the West-Central Georgia Region is on the eastern side of the trough which means the rain will stay here until Thursday or Friday.

Rain probabilities are listed at 60 percent today, 100 percent on Tuesday, 90 percent Wednesday and 80 percent on Thursday. Those rain chances drop to 40 percent on Friday.

As of 6 a.m. today, the National Weather Services says total rainfall amounts of 3 to 5 inches are forecast across much of North and parts of West-Central Georgia, roughly along and northwest of a line from Columbus to Forsyth to Athens.

A Flash Flood or Flood Watch may be issued for portions of this area in the next 12 to 36 hours if forecast rainfall totals remain similar.

High temperatures during the week will be in the mid-70s with overnight lows in the mid-60s.

MONDAY – Showers and thunderstorms likely, mainly before noon, then showers likely and possibly a thunderstorm after 2pm. Patchy dense fog before 11am. Otherwise, mostly cloudy, with a high near 77. Calm wind becoming south around 5 mph in the afternoon. Chance of precipitation is 60%. New rainfall amounts between a tenth and quarter of an inch, except higher amounts possible in thunderstorms.

MONDAY NIGHT – Showers and thunderstorms likely. Cloudy, with a low around 65. South wind around 5 mph becoming calm. Chance of precipitation is 60%. New rainfall amounts between three quarters and one inch possible.

TUESDAY – Showers, with thunderstorms also possible after 11am. High near 72. East wind around 5 mph. Chance of precipitation is 100%. New rainfall amounts between a half and three quarters of an inch possible.

TUESDAY NIGHT – Showers and possibly a thunderstorm. Some of the storms could produce heavy rainfall. Low around 64. East wind around 5 mph. Chance of precipitation is 100%.

WEDNESDAY – Showers and possibly a thunderstorm. Some of the storms could produce heavy rainfall. High near 75. East wind 5 to 10 mph. Chance of precipitation is 90%.

THURSDAY – Showers and possibly a thunderstorm. Some of the storms could produce heavy rainfall. High near 76. Chance of precipitation is 80%.

FRIDAY – A 40 percent chance of showers and thunderstorms. Partly sunny, with a high near 77.

SATURDAY – A 20 percent chance of showers and thunderstorms. Mostly sunny, with a high near 76.