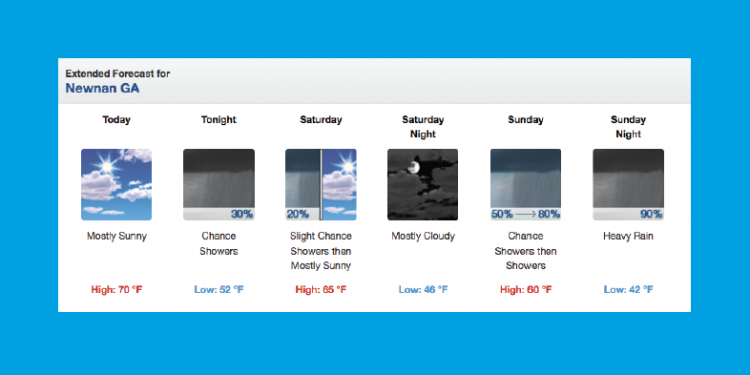 This Thanksgiving weekend will begin with mostly sunny skies on Friday before rain and much cooler weather begins arriving on Sunday.

The National Weather Service in Peachtree City says to look for sunny skies and a high of 70 degrees today. Later tonight, a slight chance of rain (30%) moves into the forecast with a low of 52.

On Saturday, mostly sunny skies return in the afternoon with a high of 65 and overnight low of 46.

Then Sunday, a storm system will move through Coweta and Georgia with heavy rainfall as the primary threat. Sunday’s high will be near 60 and dropping to 42 that night. Rain chances are listed at 80 percent and higher.

Monday night will bring the coldest weather of the season to date with lows dropping to 25.

Below is the day-by-day weekend forecast (subject to change) from the NWS:

FRIDAY – Mostly sunny, with a high near 70. Calm wind becoming northwest around 5 mph.

FRIDAY NIGHT – A 30 percent chance of showers, mainly between 9pm and 5am. Mostly cloudy, with a low around 52. Calm wind.

SATURDAY – A 20 percent chance of showers before 8am. Mostly sunny, with a high near 65. Calm wind becoming north around 5 mph in the morning.

SATURDAY NIGHT – Mostly cloudy, with a low around 46. Calm wind becoming east around 5 mph after midnight.

SUNDAY – A chance of showers and thunderstorms, then showers and possibly a thunderstorm after 1pm. High near 60. East wind 5 to 10 mph, with gusts as high as 15 mph. Chance of precipitation is 80%.

SUNDAY NIGHT – Showers and possibly a thunderstorm. Some of the storms could produce heavy rainfall. Low around 42. Chance of precipitation is 90%.