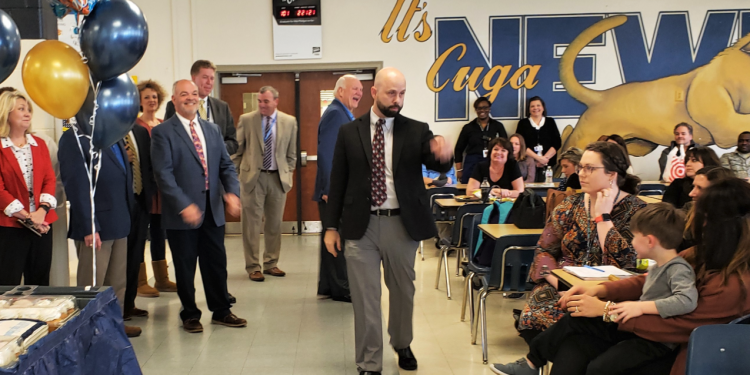 Puckett recognized his teachers and staff for the honor.  “This is about you,” he told assembled faculty members.  “This is a tough job, but you love kids and you all step up every day.  This isn’t about me, it’s about you.”

Superintendent Steve Barker – also a former Newnan High School principal – recognized Puckett for his commitment to excellence and his leadership at the high school.

The Principal of the Year program annually recognizes outstanding school leaders at the state and national level who have succeeded in providing high-quality learning opportunities for students. These principals are acknowledged by their peers for the exemplary contributions they have made to the profession. The program honors school principals who have demonstrated excellence in a number of areas

Puckett was one of six finalists nominated by other principals, and selected from a large pool of candidates by the Georgia Association of Secondary School Principals (GASSP) for the honor. Other finalists included Keith Carter of Oconee Middle School (who was named Georgia’s middle school principal of the year), Russell Brock of Carson Middle School, Kevin Gaines of Hart County High School, Debi McNeal of Richmond Hill High School and Rusty Sowell of Crisp County High School.

Dr. Chase Puckett taught in Screven County schools from 1998-2007, during which he was selected and served as Georgia’s state Teacher of the Year in 2004.  He came to Coweta County as an assistant principal at Madras Middle School, serving in that role 2007 to 2008, and then as an assistant principal at Newnan High School from 2008 to 2013. He succeeded Doug Moore as Principal of the high school in 2013.

As a principal of the year nominee and finalist, Puckett had the opportunity to talk about a number of Newnan High School accomplishments, including the school’s student ambassador program, and how Newnan High has worked to develop school culture and student leadership opportunities. Puckett said he also stressed how the school builds teacher leadership and collaborative practices to meet school improvement goals.

Newnan High School has seen significant gains in graduation rate and student academic achievement in recent years, and was recognized as a 2019 Breakout High School by GASSP last year.

Puckett said Wednesday’s announcement genuinely caught him off-guard. “It was a lot of fun for my staff to surprise me like that,” he said.  “When you work with a staff that works so hard, anything we can do to celebrate the school and school system is welcome.  I was very humbling to see so many teachers, board members and system staff there.”

Pictured above – Dr. Chase Puckett was selected as Georgia’s 2020 High School Principal of the year by the Georgia Association of Secondary School Principals.  Puckett, above, was surprised by the announcement during a staff meeting at the high school on Wednesday.